It's that time again when Tony Blair emerges from his coven and does his rounds of all the news channels.  Why his opinion is so acutely relevant that we have to see his grinning face on every single media outlet over a 24 hour period every couple of months is anyone's guess.  Other former PMs are not afforded such a regular barrage of coverage, although arguably they are not so desperate to have their egos massaged.  David Cameron largely disappeared off the face of the earth for three years, but then no-one missed him.  If only Blair would do the same.

A video clip has appeared online of Blair's appearance on BBC News this morning, during which there appears to be a brief moment of satellite interference that distorts his face.  Watch below.

David Icke will be all over this as proof that Tony is one of the reptilian overlords of the New World Order, or whatever crazy shit he is spouting these days - in addition to his 5G nonsense.

Older readers may recall this Tory poster from the 1990s... 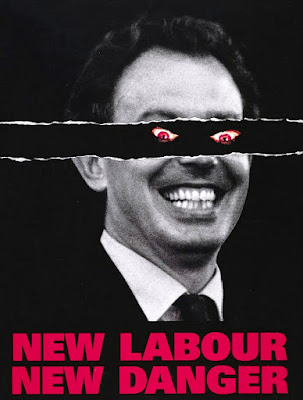