The assistant general secretary of the RMT trade union has been suspended after posting Facebook comments in which he said he would be "throwing a party" if Boris Johnson died.  Steve Hedley also wrote that he hoped "the whole cabinet of Tory bastards get it too".  Hedley's comments were made earlier this week during a discussion on his Facebook page about the PM having been taken into intensive care.  He was later condemned by senior figures in the RMT, including the union's president Michelle Rogers and his boss, the general secretary Mick Cash.  Hedley has now been suspended from his job, a role that reportedly pays a £100,000 salary.

A spokesperson for the Rail, Maritime and Transport union said: "Following a meeting of the union's National Executive a decision has been made to suspend Senior Assistant General Secretary Steve Hedley with immediate effect while a formal investigation takes place into his conduct". 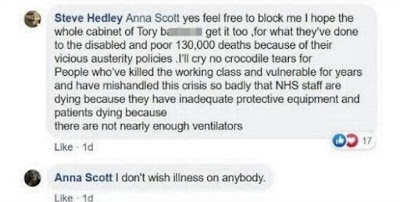 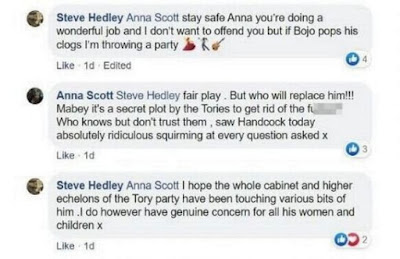 The Daily Mail reports that Hedley also compared Boris Johnson to fascist dictators including Hitler and Mussolini.  When a friend pointed out that Boris was a human being, Hedley apparently responded: "Hitler, Mussolini and Franco were human beings too - would you use the same argument for them?  I take it it doesn’t extend to Hitler who killed millions but it does to Boris who helped kill 130,000 through Tory austerity policies".  He is then said to have posted the following statement: "Would those who are feeling sympathetic to Boris Johnson (partly responsible for 130,000 deaths by helping implement Tory austerity policies against the most vulnerable in society) because he’s human extend that sympathy to mourning Thatchers death as she had a family too?  If the answer is yes where if anywhere along the continuum do you stop Pinochet, Franco, Mussolini, or even Hitler?"

Prior to his suspension Hedley gave an interview to LBC Radio in which he discussed various issues with presenter Maajid Nawaz.  However, when Nawaz raised the topic of Boris Johnson the interview turned sour and Hedley hung up the phone.  Listen below.

An Irish republican originally from Londonderry, Hedley has history when it comes to vicious remarks towards Conservatives.  In a 2016 interview, again with LBC, he stated: "I think all the Tories are an absolute disgrace, they should be taken out and shot to be quite frank with you".  He wasn't suspended from the RMT then, or the Labour party.  Also deemed acceptable at the time was a picture he posted to his Facebook account in which he brandishes an automatic rifle whilst on a trip to Russia.

The Soviet cap badge he is wearing alludes to Hedley's passion for hard left politics.  A vehement supporter of Jeremy Corbyn, he is frequently pictured making raised fist salutes and has repeatedly called for the overthrow of capitalism.  He supports the prosecution of British troops and politicians over Bloody Sunday and has referred to Hugo Chavez as a 'great leader'.  In 2017 he tweeted an image of two Tory effigies hanging from a bridge in Manchester.  Last year he posed for a picture with his daughter at the grave of Italian Marxist hero Antonio Gramsci.  Another picture on his Facebook page shows him in his office surrounded by communist regalia, including a poster of Che Guevara and a bust of Lenin.  It's not clear if this is the same bust that sat on the office desk of one of his other idols, former RMT general secretary the late Bob Crow.

Also unclear at this present time is whether Hedley will face any action from the Labour party over his latest outburst.  He was previously suspended from the party in 2016, not for calling for the death of Tories, but for the comparatively innocuous crime of labelling Corbyn critics 'right-wing traitors'.  He was readmitted to the party in March 2017, but last November he was reportedly being probed again, this time over allegations of anti-Semitism.  Video footage of Hedley that emerged around that time showed him screaming abuse at a Jewish activist.  The footage was originally taken at a meeting in 2011 where Hedley was giving a speech entitled 'Palestine's fight for freedom'.  Hedley refers to the heckler as "a disgrace to the Jewish people" and a "modern day Nazi".

Hedley is also a staunch defender of the expelled former Labour MP Chris Williamson.  He has also voiced support for Marc Wadsworth, a Labour activist expelled from the party in 2018 over an alleged altercation with Jewish Labour MP Ruth Smeeth.