Cllr Sheila Oakes is facing disciplinary proceedings at work following her Facebook outburst in which she wrote that Boris Johnson 'deserves' to be in intensive care.  Cllr Oakes works for the Ilkeston branch of VHS Fletchers Solicitors as a legal advisor, but following yesterday's backlash the firm released a statement confirming that she had been suspended pending an investigation. 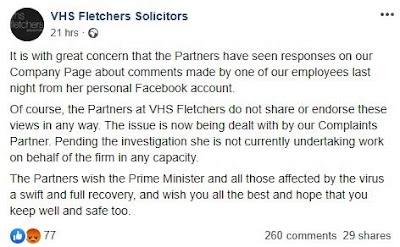 In addition to the statement, her profile page on the firm's website has been deleted.  This morning the firm released a second statement, saying that the result of their investigation would be published in the next few days. 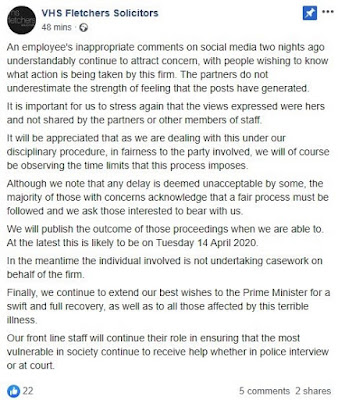 Following her Facebook outburst Cllr Oakes' career in local politics is all but over.  Labour withdrew the party whip yesterday and will carry out its own investigation.  Cllr Oakes will continue to sit as an independent in the meantime and is unlikely to be re-elected.
at April 08, 2020