A fascinating Twitter thread was compiled by a grooming gang victim yesterday.  Rotherham survivor Ella Hill published details of a racist tweet she reported and the astonishing response she got from Twitter.

The Hate Reporting Organisation told me that, “Twitter’s Hateful Conduct Policy only applies to protected groups: this includes races which have historically been marginalised and oppressed, which white people have not.” pic.twitter.com/7EXYGeZ0QB
— Ella Hill (@EllaHillUK) April 15, 2020

A screenshot of the tweet she reported can be found below.  At the time of writing no action has been taken and the tweet is still up. 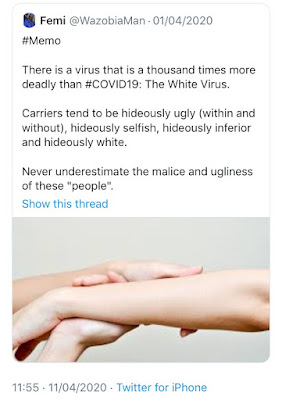