Commie journalist Aaron Bastani was forced into a humiliating apology last weekend over a tweet in which he labelled radio presenter Maajid Nawaz a 'former terrorist'.  Last December Bastani had responded to Nawaz's criticism of Jeremy Corbyn by tweeting that Nawaz was "literally a former terrorist".  Nawaz was once a member of the Islamist group Hizb ut-Tahrir and served time in an Egyptian prison for his membership.  However, while the group is banned in many countries it is not considered a terrorist group in the UK and is not proscribed here.
Nawaz took legal action following Bastani's tweet and sued for defamation.  Last Friday Bastani issued the following public apology, including a commitment to donate to Nawaz's counter-extremism group Quilliam. 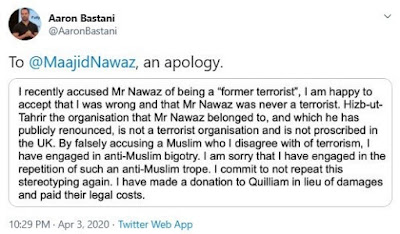 Bastani is the co-founder of hard left media outlet Novara Media, the same organisation that employs Ash Sarkar.  He espouses his own brand of communism, something he calls 'fully automated luxury communism'.  It is as daft as it sounds.

You may be familiar with Maajid Nawaz from his weekend slot on LBC Radio or regular appearances on Sky's The Pledge.  Having turned his back on Islamism he went on to form Quilliam, a think tank opposed to Islamist ideology.  In recent years Nawaz has become highly critical of the hard left and has called for a national inquiry into Muslim grooming gangs.  Much of his Twitter activity on Friday and Saturday was dedicated to rubbing Bastani's nose in it.  Glorious.