The grooming gangs petition that enjoyed major success at the beginning of last month appears to have been put on the back-burner during the coronacrisis.  The petition aims to force the government to release Home Office findings into grooming gang activity, as promised by previous Home Secretary Sajid Javid.  However, that investigation was pledged almost two years ago and Javid was later accused of shelving it.  Priti Patel, his successor as Home Secretary, reportedly enquired about the whereabouts of the report in February.  Later that month the government said it would not be releasing the findings of the report as it would not be in the 'public interest'.

Following the government's refusal to act, the petition was set up on the government website.  A few days later on March 5 the petition crossed the 10,000 name threshold required for a government response.  Five days later it broke through the 100,000 barrier required to be considered for a Parliamentary debate.  At this point the government had yet to respond.  It's perfectly understandable that a Parliamentary debate during the present crisis is not necessarily a top priority for government, but over a month later they have not even issued a response. 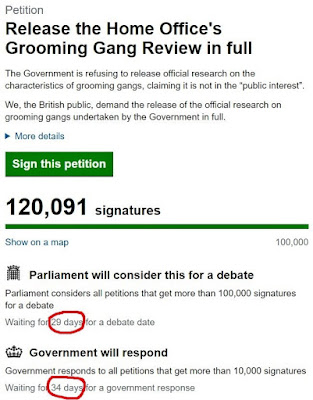 It's worth noting that the World Health Organisation didn't declare a pandemic until March 11 and the UK government didn't issue its first advice until March 12.  Could no-one seriously find the time to respond to the petition prior to this?

Of course they could.  In any case, other petitions on the same website have garnered a government response during the present crisis - more than twenty in fact.  The list of petitions having received a government response in the last few weeks include calls to make hedgehogs a protected species and introduce legislation for motorists passing horses.  No-one is going to detract from these causes, but neither petition received half the number of signatures received in relation to grooming gangs, a national scandal that has wrecked thousands of lives.

Most of the recent petitions the government has responded to have barely crossed the 10,000 mark, let alone got close to the 100,000 threshold.  On this very day the government responded to a petition calling for the UK to close its borders.  The number of signatures on this currently stands at less than 15,000. 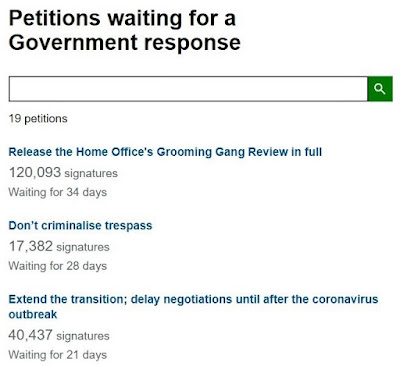 Coronavirus should not and must not be used as a means to bury this scandal once again.  To do so would make this government no better than the local authorities and police forces that have covered up these gangs for decades.