A Labour member of Leeds City Council has claimed that Boris Johnson's hospitalisation is a 'publicity stunt'.  Cllr Jools Heselwood made the remarks on a Facebook post by radio host Ryan Swain and urged people not to "fall for it".  When someone objected to her comment, she gave the condescending reply: "I just understand politics". 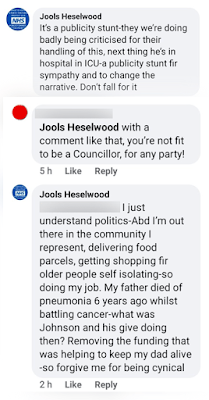 As with the case of Cllr Sheila Oakes in Derbyshire earlier this week, Cllr Heselwood was quickly forced into a humiliating climb-down.  She deleted her comments and issued a public apology.  Writing to the leader of Leeds City Council (also Labour) she wrote: "I am deeply sorry for my crass and offensive comments about Boris Johnson's hospital treatment.  I was wrong, I should never have made that claim and I apologise unreservedly.  I wish the Prime Minister a speedy recovery and my thoughts are with him and his family at what I know is a very difficult time for them".  That's some turnaround.

A Labour spokesperson said: "Julie Heselwood fully accepts her post was wrong and has apologised unreservedly for it".

Cllr Heselwood represents the Leeds council ward of Bramley and Stanningley.  Speaking of publicity stunts, she is clearly very proud of documenting her efforts in the current crisis.  She is not even above a supermarket selfie...

So this is something I never thought I’d be doing-shopping in Morrison’s at 7AM wearing a mask, helping the fantastic @BramleyElderly get food for older people who are self isolating. Thanks to my co-shoppers @I_M_Shaw , Rebecca Durrant and Phil Mcconnell for making it fun!!! pic.twitter.com/ETlOh1J1Py
— jools heselwood (@joolsheselwood) April 6, 2020