THIS IS THE LEFT

If the current predicament facing our Prime Minister shows us one thing, it is our capacity for empathy.  Voices from across the political spectrum have expressed compassion.  While hard left politicians may have been slow to react on Sunday night - if at all - last night was different.  When news broke that the PM's condition had worsened there were messages of support from Jeremy Corbyn, John McDonnell, Mark Drakeford and even Momentum.  However, while such sentiment is welcome in these universally troubling times, you won't have to look far to find some disturbing and utterly vile comments in response to such messages.

We know from recent weeks that whenever coronavirus strikes down a member of the government, it is celebrated by a small but vocal minority on social media.  This blind hatred first emerged when health minister Nadine Dorries was diagnosed and has continued at every stage of Boris Johnson's coronavirus decline.  The fact that this wicked virus does not discriminate is apparently lost on these imbeciles.  Since the hate campaign against Dorries, there have been numerous deaths among Labour councillors around the country as a result of Covid-19.  Labour MP Tony Lloyd is currently in hospital suffering from coronavirus.  No-one here is calling for his death or glorifying the death of any left-wing politician.

Yet here is a small selection of the vile messages that have been posted on social media since Boris contracted coronavirus. 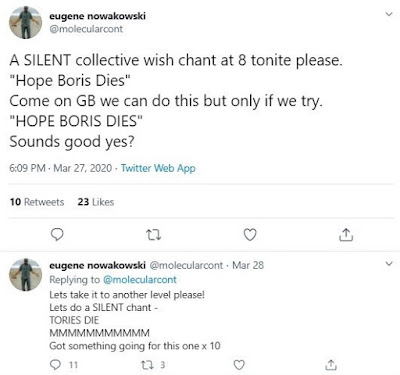 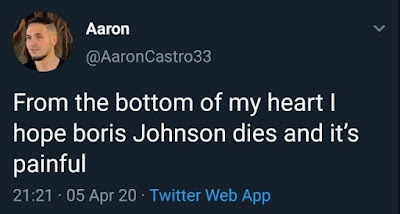 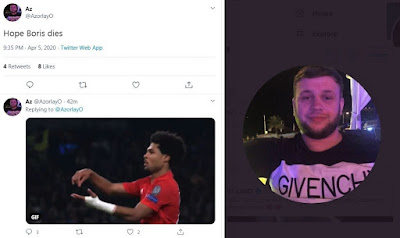 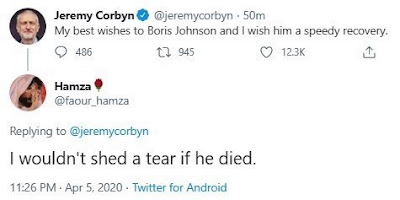 The hate from the left appears to be unrivalled, but sadly it is not limited to the fringes of the Labour Party.  One of those spewing their bile on social media last night was a Labour councillor and town mayor.  Beneath a Facebook asking people to say a 'little prayer' for the PM, Cllr Sheila Oakes posted the following comment.

Unlike so many of the faceless Labour activists on social media who can swiftly lock down or delete their accounts, Cllr Oakes had to personally own this.  She apologised earlier today, but in a BBC interview seemed oblivious to the nature of her remark and how it might be perceived: "I didn't think what I said would upset so many people.  It came across as not a nice thing to say.  I'm concerned about nurses and doctors who don't have protective equipment.  I said something when I was angry without thinking about the Prime Minister or his family".

Her half-hearted apology was too little, too late and her career in local politics now lies in tatters.  The party has withdrawn the whip from her and she has been publicly condemned by Labour's group leader on Amber Valley Borough Council.  If it wasn't for coronavirus Cllr Oakes would be up for re-election next month, but she can now cling on to her Amber Valley seat for another year, albeit as an independent.  Her future status as Mayor of Heanor is unclear.  To compound her disgrace, Cllr Oakes also has a long legal career and is currently employed by VHS Fletchers Solicitors in Ilkeston.

Labour's Richard Burgon also came in for criticism over his response - or lack of it - to Boris Johnson's hospitalisation.  While most of his colleagues were sending their best wishes last night, the outgoing Shadow Justice Secretary proudly tweeted a list of his favourite policies from his time on the front bench.  Of course none of those policies will ever be realised, but it was his lack of empathy and inappropriate timing that led to criticism.  "Now is not the time" was how several Twitter users responded.  Burgon later hastily issued a message of support, by which time its meaning was empty.

Also completely devoid of support for the Prime Minister were Burgon's hard left colleagues Diane Abbott and Ian Lavery.  Abbott was active on Twitter last night, retweeting Burgon's self-indulgent list among others, but she did not once refer to the Prime Minister's ordeal.  Instead, Diane has been tweeting about how coronavirus adversely affects African-Americans in US neighbourhoods.  Yes, seriously.

When this is all over, and hopefully we have our Prime Minister back in good health, the left ought to take a long hard look in the mirror.
at April 07, 2020