On Thursday Keir Starmer revealed his full frontbench line-up, using almost half of the entire Parliamentary Labour Party to fill up the positions.  The sound of a barrel being scraped could be heard with some of the decisions.  Lloyd Russell-Moyle, Jess Phillips and Karl Turner were just some of the balloon heads appointed, but it was the appointment of Naz Shah that attracted the biggest controversy.  It was not so much the fact that she was appointed, but the nature of her appointment.  Naz will be the first ever Shadow Minister for Community Cohesion.

It sounds like a sick joke, but that's the brief Starmer has handed the woman who thought it was funny to suggest grooming gang victims should shut their mouths 'for the good of diversity'.  Starmer's role as Director of Public Prosecutions will come under greater scrutiny now and we can be sure that his own history in relation to the grooming gang cover-up will come home to roost, but from this appointment we can already see that the man has no shame. 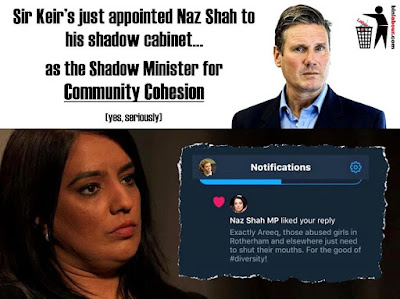