Labour's Zarah Sultana is just a few months into her first (and possibly only) term in office, but she's certainly made a name for herself.  The Corbyn loyalist is notable for her outlandish statements and today she informed her followers on Facebook and Twitter that coronavirus is somehow 'targeting' black and Asian people... 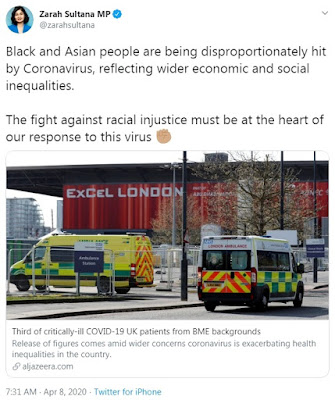 It's quite something, even for Sultana.  The virus does not discriminate - just ask Boris Johnson.  There's also a key piece of the jigsaw that Sultana, and the al-Jazeera report in her tweet, conveniently leave out.  The virus has disproportionately hit populated areas, naturally because that's where most people live and crucially they live in close proximity to one another.  Towns and cities are also the areas where most of Britain's ethnic minorities live.  London has by far the most confirmed cases and deaths, followed by Birmingham.  Both cities contain the largest ethnic minority populations in the UK, so it stands to reason that so many victims will be from black and Asian communities.

Do the maths, Zarah.  There's no need to fight 'racial injustice' where there is none - only the need to fight the same wicked virus that we can all catch and all spread, regardless of the colour of our skin.  Grow up.

Zarah has observed the thousands of responses to her daft tweet and has - 13 hours later - 'clarified' things.  In a series of follow-up tweets she confirms that: "Covid-19 affects us all.  Anyone can catch it, anyone can spread it".  Did she read our post?
at April 08, 2020