A YouGov poll commissioned by Sky News has backfired spectacularly.  The broadcaster wanted to explore various public attitudes to the pandemic, including trust.  Unfortunately for Sky and their media colleagues the poll revealed that the mass media was least trusted by far.  The NHS, Professor Chris Whitty, Boris Johnson, Sir Patrick Vallance and the Civil Service all registered positive net figures on trust, while Dominic Raab, Matt Hancock and Keir Starmer were in negative figures.  TV journalists and newspapers were far and away the most distrusted among the options provided with TV journalists registering negative figures of -40 and newspapers -55. 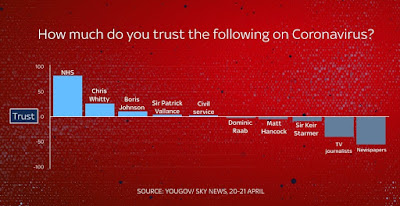 This is a damning indictment of the media's behaviour at this time of national crisis.  Their narrative has become increasingly negative over the past few weeks, despite the NHS holding up under the strain and despite the flattening of the curve.  Their desperation to make PPE shortages a huge story can be seen on the faces of the news presenters when they are faced with a medical guest who doesn't accept it is quite the disaster they are making it out to be.  The barrage of negative questions at the daily government briefings hasn't gone down too well either.  Why is it that these reporters persistently criticise the government for not signing up to the EU PPE procurement scheme when that same scheme has so far failed to produce a single piece of kit?

When this virus has finally been defeated, the media will not be among those to have come out of this crisis in a positive light.