Back in 2018 when the England football team was enjoying a good run in the World Cup, the then Labour leader was fully on board the sporting bandwagon.  Sensing political gain in patriotism he called on the government to make St George's Day a bank holiday if England won the tournament.  He also said a Labour government would make all the national saints' days bank holidays.  Alas, the England team ran aground in the semi-finals and Corbyn dropped his pretence. 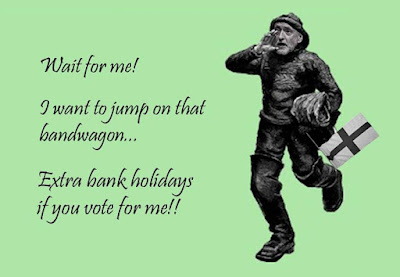 Two years on and Corbyn is no longer chasing English votes.  On St George's Day 2020 the patron saint of England didn't get a mention.  He tweeted for Thursday's clap for carers, he tweeted for International Workers' Memorial Day (happening next week) and he tweeted the following...

Corbyn's disdain for the English didn't go unnoticed.  Ex-Labour MP Kate Hoey was one of those to point out his glaring omission...