Another individual perpetuating the conspiracy theory about Boris Johnson is a fanatical Remainer with a vendetta against our Prime Minister.  Yesterday we reported on Labour's Andi Fox and the phoney conspiracy theory she shared on Twitter.  Marcus Ball has gone much further (see tweet below). 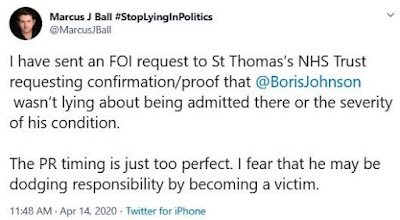 Speaking of timing, Marcus's shameful timing couldn't really be worse.  We are in the grip of a national emergency and the NHS is at the forefront of fighting it - meanwhile, he wants NHS staff to run around in a paper chase to entertain his daft egocentric conspiracy theory.  Needless to say his tweet didn't go down too well.  Among the many to respond was Piers Morgan who wrote: "Fuck off you stupid twat".

Ball was soon scrambling to defend his position and in a follow-up tweet insisted he was not calling NHS staff dishonest, only Boris Johnson who he labelled a 'known liar'.  He also released a video in which he repeated accusations that Boris is a serial liar, listing a number of alleged examples including Vote Leave's infamous £350 million a week claim.  This is the only basis he has for suggesting that the PM's hospitalisation was somehow staged.  He has no actual proof whatsoever.

So who is Marcus Ball anyway?  Well, he calls himself a 'social entrepreneur' and he campaigns against lying in politics, something that he wants outlawed.  No-one's arguing with that, but the company which he set up to fund his campaign wasn't originally called 'Stop Lying In Politics Ltd'.  It was founded in 2016 as 'Brexit Justice Ltd' and maintained this name until last September according to Companies House.


In 2016 Ball was interviewed by Tom Slater of the Daily Express and admitted that he thought Leave voters were 'thick'.  Watch below.

While Ball claims to be non-partisan his campaign appears to be solely aimed at Boris Johnson.  He spent three years crowdfunding more than £300,000 to launch a private prosecution against Boris, only to see the case thrown out last August.  In his latest video he threatens more legal action, although his crowdfunding site is now on hold after having raised more than £450,000.  The Telegraph reported last May that Ball had used some of this cash to rent a plush London flat, as well as professional headshots, self-defence classes and anti-Brexit cupcakes!