It didn't take long for Labour to run into trouble in the Starmer era did it?  The party's internal report into its own anti-Semitism problem has sparked a fresh round of fierce infighting.  The key problem with the report appears to be the motive behind it.  Rather than investigate allegations of institutional anti-Semitism, the Corbynista hierarchy have gone to extraordinary lengths to smear its accusers - primarily its own whistleblowers.

The report was initially intended to provide a defence in light of the Equality and Human Rights Commission investigation, but lawyers have advised the party not to submit it to the EHRC.  The leaking of the mammoth 851-page report could also create a number of legal problems for Labour.  It contains unredacted details of party members, including whistleblowers, some of whom have already threatened legal action.  The data leak also leaves the party open to huge fines from the UK's data watchdog.

The leak is a cynical move by Corbyn's supporters and born partially of spite, but also intended to defend his legacy, albeit the left's twisted perception of what that actually is.  Can it be a coincidence that it has happened less than two weeks into Keir Starmer's tenure, particularly given that Starmer has brutally purged Corbyn loyalists from the frontbenches?  The timing is also very apt given that only a few days ago Corbyn claimed he would have won the 2017 general election were it not for the internal challenges to his leadership - aka 'the coup'.  The report suggests that the 2017 election defeat was largely caused by party staff hostile to Corbyn, a somewhat odd conclusion for a report that is supposed to deal primarily with anti-Semitism.  Curiously, while the left is currently engaged in keyboard-tapping outrage over the report's content, the one person who is totally silent now is Corbyn himself.  Funny that, almost as if he lit the touchpaper and then strolled away.

Laughably, week two into their leadership, Keir Starmer and Angela Rayner have announced an urgent investigation... into the investigation.  This was their joint statement:

"We have seen a copy of an apparently internal report about the work of the Labour Party’s Governance and Legal Unit in relation to antisemitism.  The content and the release of the report into the public domain raise a number of matters of serious concern.

We will therefore commission an urgent independent investigation into this matter.  This investigation will be instructed to look at three areas.  First, the background and circumstances in which the report was commissioned and the process involved. Second, the contents and wider culture and practices referred to in the report.  Third, the circumstances in which the report was put into the public domain.

We have also asked for immediate sight of any legal advice the Labour Party has already received about the report.

In the meantime, we ask everyone concerned to refrain from drawing conclusions before the investigation is complete and we will be asking the general secretary to put measures in place to protect the welfare of party members and party staff who are concerned or affected by this report". 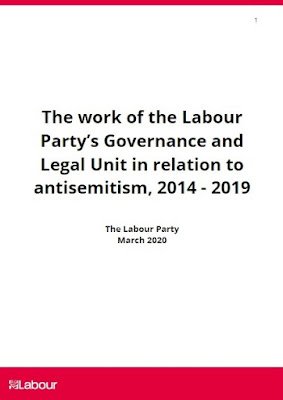