The Beeb's Andrew Neil was among those mocking Labour's Richard Burgon over a coronavirus tweet this morning.  Bungling Burgon has dedicated a lot of time to attacking the government throughout the lockdown, but he opened himself up to ridicule by quoting some highly selective figures on the worldwide death toll... 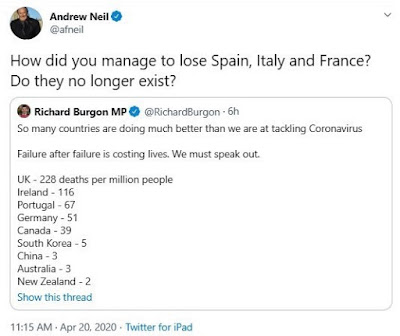 It wasn't just Spain, Italy and France that Burgon deliberately omitted from his anti-UK list.  The source he quoted in his Twitter thread shows that Belgium has also suffered a higher death toll per population density.  Also curiously lacking from his list is the United States.  Although the US has suffered the most number of deaths by far, it is still behind the UK in terms of deaths per population density.  Of course Burgon wouldn't want to give President Trump any credit, someone he despises even more than Boris Johnson.

This is the full top ten that Dickie didn't want to broadcast...