The latest YouGov findings show that neither coronavirus or new opposition leadership has dramatically impacted on public opinion where Westminster is concerned.  The poll was carried out at the end of last week and although Labour have cut the Tory lead by three points, Keir Starmer is clearly not inspiring the public as a leader.  He is currently trailing in third behind the 'don't knows' when it comes to who would make the best PM. 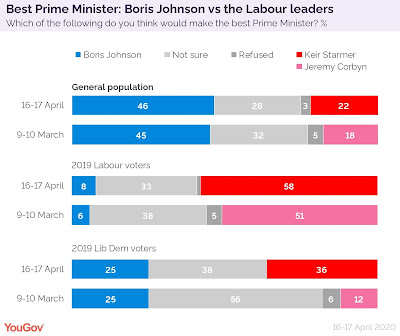 This is a poll that dogged Jeremy Corbyn throughout his leadership as he never did overtake the 'don't knows', even when he was up against Theresa May at her lowest ebb.  There is some solace here for Sir Keir as he has improved on Corbyn's figures by four points.  However, this still leaves him 24 points behind Boris Johnson.

One obstacle for Starmer appears to be a lack of recognition with the general public.  His painfully dull persona was always going to hold him back, but just compare his YouGov ratings with that of Boris Johnson.  Boris is the most popular and most famous Tory politician, whereas Starmer is the 27th most popular and 30th most famous Labour politician. 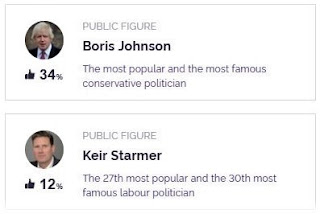 In terms of popularity Starmer trails behind dozens of Labour backbenchers, former party leaders and former MPs including Corbyn, McDonnell, Brown, Blair, both Milibands, Neil Kinnock, Dennis Skinner, Kate Hoey and Dave Lammy!  The fact that Ed Balls tops this list suggests that reality television is a powerful influence on public opinion.  It's highly doubtful that wooden Starmer would ever be that desperate, but could anyone have ever predicted that one day Labour's shadow chancellor would one day be seen prancing around in green face paint on prime-time Saturday night telly?

In terms of fame Starmer is even further down the list and is leapfrogged by the likes of Diane Abbott, Peter Mandelson and Keith Vaz.  If Starmer wasn't such a heartless monotone-voiced robot this may be disheartening to him, but then he would quite rightly say that Westminster is not a popularity contest.  It does help though, especially if you want people to vote for you.

Back to the nitty-gritty and the latest Westminster voting intention figures.  According to YouGov's latest findings the Labour Party have advanced on the Tories by a net three points, due in most part to a decline for the Lib Dems/Greens.  Remain voters switching to Labour?  This would come as no surprise seeing as Starmer was the chief architect of Labour's second referendum con. 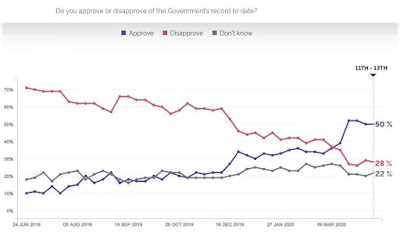