The chair of Labour's governing National Executive Committee has shared a baseless Covid-19 conspiracy theory on Twitter.  Corbyn loyalist Andi Fox shared a tweet earlier this week that suggested the Prime Minister was not really suffering from coronavirus.  Fox is arguably the most powerful elected Labour official with the exception of Keir Starmer himself.  After the tweet was brought to the attention of the national media she locked down her Twitter account.  Below is a screen capture of the tweet taken before she made her account private. 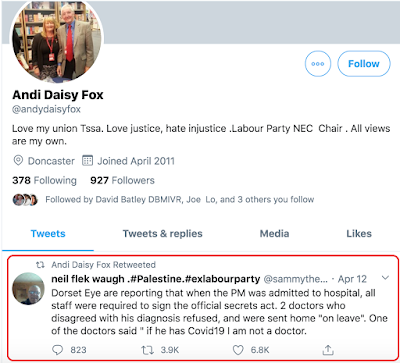 The Independent quotes 'sources close to Fox' as saying she had retweeted this by 'accident'.  It's a lame excuse and one we've heard so many times before.  In actual fact the Boris conspiracy theory is quite popular on the loony left.  Only last week a Labour councillor in Leeds was forced to apologise after calling the PM's hospitalisation a 'publicity stunt'.  So what about the source of the claims in Fox's tweet?  All is not as it seems.

The original author of the tweet - Neil Waugh - describes himself as a 'left-wing socialist' and his priority in life appears to be the Palestinian cause.  He is followed on Twitter by hard left Labour MP Richard Burgon.  In the Boris conspiracy tweet he refers to the 'Dorset Eye' so nonchalantly as if to confer some kind of legitimacy.  However, the Dorset Eye is far from a reputable local news outlet.  It's a blog run by a couple called the Cridlands and it has a proven left-wing agenda.  This agenda includes defending Corbynistas from accusations of anti-Semitism.

Jason Cridland's Facebook account shows that he not only follows dozens of Labour pages, but also Marxist groups and anti-Tory pages too.  They include the following:

He also follows a page called 'Labour Against The Witchhunt', an organisation that defends Labour activists accused of anti-Semitism, including those now expelled from the party such as Marc Wadsworth, Jackie Walker and Chris Williamson.  There is clearly nothing impartial about the Cridlands and their 'independent news media'.

Finally, and we've saved the best until last.  The conspiracy propagated by their website - tweeted so matter of factly by Neil Waugh and then retweeted by Andi Fox - has no basis in fact.  The Cridlands have now admitted that the names of the doctors were 'made up' and the article itself may well have been intended as 'satire'.  This was the statement they posted to the original article, which at the time of writing is still there and floating around the Twittersphere:

"We realise now that this article may well be satire.  The names have simply been made up.

Either way the point is that we have a PM who is perceived by millions as a liar and a government who have handled the Covid-19 crisis in a chaotic and often criminal way.

We do however apologise to those who may initially have believed that this article was 100% factual (without satirical substance)".

Not the best advert for a 'news site' is it?  And certainly not the sort of nonsense the chair of Labour's NEC should be spreading either.