Ash Sarkar is clearly chomping at the bit to turn thousands of British deaths into a weapon against the Tories.

This heartless tweet is symptomatic of the left, a spiteful ideology for whom Corbyn's public message of "kinder, gentler politics" is an alien concept.  The true face of the left is unmasked when a Tory (or a Labour moderate, or a Royal) is diagnosed with coronavirus.  Corbyn's followers hanker for the death of their political opponents and anyone who doesn't share their twisted world view. 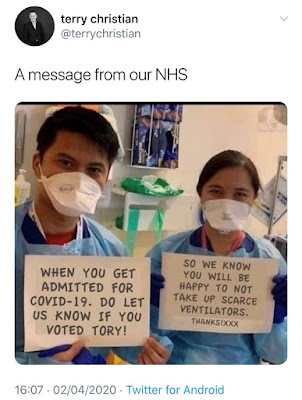 The above tweet (now deleted) comes from the same twisted mind whose many horrid responses to Brexit included a tweet that hoped for a "good virulent strain" of flu so that it would wipe out elderly Leave voters.

Unfortunately for Ash Sarkar and her vile ilk, even if coronavirus turns into the catastrophe that returns Labour to government, her beloved Corbyn, McDonnell and co will be long gone.  The hard left will be, as ever, in the wilderness where they belong.
at April 03, 2020