When Labour MP Neil Coyle tweeted last week that history would judge Corbyn as "Labour's worst ever leader" it was always going to trigger the loony left.  Step forward 'Colin', a man reportedly from the Labour heartland of London and who calls himself a supporter of Jeremy who does not support centrists.  He thought a Twitter poll would prove Neil Coyle wrong (because obviously the world revolves around Twitter).  It didn't quite go according to plan... 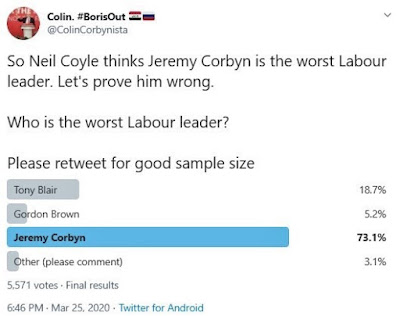 Some of the stuff that Colin posts is so bizarre that this may actually be a carefully crafted parody account.  Note the Russian flag in his profile name, such a cliché.  On the other hand, they're not called the loony left for nothing.
at April 03, 2020