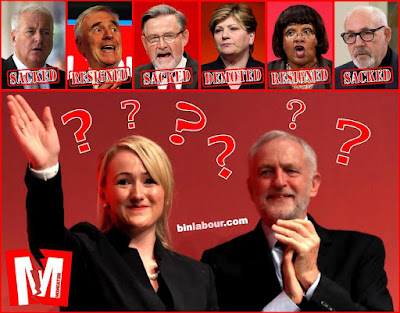 Keir Starmer has made a series of major appointments to his shadow cabinet and it's grim reading for the hard left.  Shadowing the Great Offices of State will be the following:

McDonnell and Abbott announced they were standing down prior to the election result.  Thornberry will remain on the front benches in a lesser role to be announced on Monday.  Hard left Corbyn loyalist Ian Lavery has been sacked as party chairman and two other Corbyn allies have also been consigned to the backbenches - Barry Gardiner and Jon Trickett.

In a further dig to the hard left, Jonathan Ashworth remains as Shadow Health Secretary.  During the general election Ashworth was caught slagging off Corbyn in a private phone conversation.

Crucially, and this is the one everybody's waiting for, there is no indication that Corbyn himself will be getting a frontbench post.  In the last couple of months Corbyn made no secret of the fact he coveted a juicy role in his successor's team, but with all the top roles having already been filled it's not looking good for him.  The Foreign Secretary role he was said to be keen on has gone to the moderate Lisa Nandy.  There is no word yet on whether Rebecca Long-Bailey will play a role either.