Havant Constituency Labour Party have disappeared from social media after one of their Facebook posts sparked outrage (see post below).  The group had shared images from a painting depicting Boris Johnson, Matt Hancock and Michael Gove with bloodied hands. 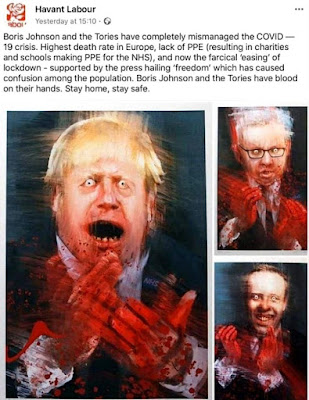 Having drawn criticism from local Tory politicians, the group initially responded by calling its detractors 'snowflakes' before removing the post and issuing a series of apologies (see below).  Since then it has deleted both its Facebook and Twitter accounts, both still offline at the time of writing. 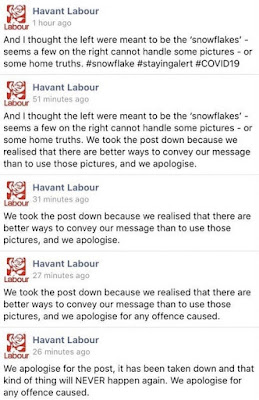 An apology was also forthcoming from Rosamund Knight, secretary of Havant CLP and Labour's candidate at the last general election.  She wrote in a tweet:  "Recently a post was made on the havant labour page that was not appropriate.  I am not responsible for that page and the person who was is being dealt with.  I do not condone in any way what was posted, and the image was not created by anyone in Havant Labour Party, simply shared".  The images were taken from a painting by a Manchester artist who is currently auctioning his work on eBay.

Knight followed up her tweet with another, demanding that a Tory councillor who had retweeted a screenshot of Havant Labour's post take it down.  There had been a backlash against several local Labour members she added.  Knight was also keen to deflect when she spoke to The Portsmouth News, saying that the person responsible for the post was 'very, very upset' andit had resulted in 'threats'.

A Labour councillor in Portsmouth was less than apologetic, tweeting: "Imagine being more offended by a satirical artwork than a policy of systematic culling".  Cllr Thomas Coles has since deleted his tweet.

Alan Mak, the Conservative MP for Havant, said: "This vile post shows the Havant Labour Party is more interested in political point scoring online then helping the community during this difficult time.  I’m glad after five attempts they were able to finally admit the post was wrong on every level and have apologised.  I hope that the individual responsible for this disgraceful post will be expelled from the Labour Party".

Isn't it a bit rich for the Labour Party to be depicting a Tory government with blood on its hands? 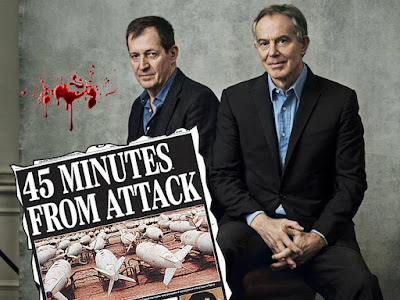