Hard left MPs spent the first month of Starmer's leadership plotting against their new leader, albeit Corbyn himself was careful to distance himself in public.  His signature was missing from several letters distributed by the Socialist Campaign Group of Labour MPs in relation to the infamous leaked report.  On Monday his name did appear on their latest declaration, but this was aimed at the government and arguably the nation as a whole (see below). 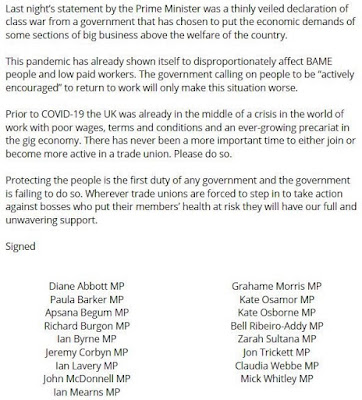 Once again it appears that the hard left have 'revolution' on their minds, a tactic tried and failed only last year during the Brexit stalemate.  The difference now is they are not hoping to deploy limp-wristed latte-sipping Remainers as a proxy, but the workers - backed by the trade unions.  Where was their concern for workers over the last few months when millions of key workers continued to operate checkouts, stack shelves and collect our bins?  That's right, they were more interested in the plight of jail inmates and asylum seekers catching the virus.

Whether it's Starmer and his moderates or Corbyn and his commies, both Labour wings are intent on stirring up trouble as the government seek a way out of the crisis.  It's in their party political interest that the lockdown continues indefinitely and causes maximum damage to the British economy - they see it as their route to power.  It goes without saying that economic destruction is most certainly not in the national interest and Labour's constant sniping and sabotage is abhorrent.  Imagine if Attlee had called for strike action in spring 1945 just as the Allies were pushing for victory in Europe?

All this posturing and division at a time of national crisis will not be forgotten quickly.  In any case, Labour don't care about the working classes.  The party abandoned them in favour of the middle classes two decades ago.  What's more, Labour politicians from both wings of the party have spent the last four years decrying the 'stupidity' of the workers in opting for Brexit - something else that won't swiftly be forgotten, in particular north of Watford.

Finally, if our country was truly in the 'middle of a crisis' prior to Covid-19 (as the above letter absurdly suggests), just how bad could your politics be to have got so decisively thumped by the long-standing governing party you deem responsible for it?  Labour = losers.
at May 12, 2020