The Labour MP for Canterbury has resigned from the front bench after a Mail on Sunday exposé on her alleged lockdown violations.  Rosie Duffield is said to have enjoyed a long walk with her married lover last month and he is also reported to have visited her constituency home in Kent.  The pair are now living together in Duffield's second home in London. 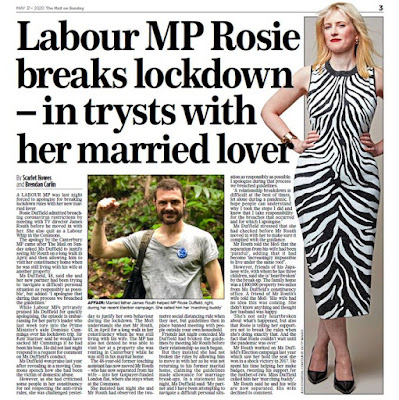 Duffield told the Mail on Sunday: "My partner and I have been attempting to navigate a difficult personal situation as responsibly as possible.  I apologise during that process we breached guidelines.  A relationship breakdown is difficult at the best of times, let alone during a pandemic.  I hope people can understand why I took the steps I did and know that I take responsibility for the breaches that occurred and for which I apologise".

Duffield's lover has three children and his wife is said to be 'heartbroken' at the break-up.  James Routh, 45, worked on the MP's re-election campaign last year.  Duffield took the seat in 2017 in a surprise victory said by many to have been largely influenced by the large student population in the city.  Previously the seat had been held by the Conservatives since 1918.  Defending one of the UK's tiniest majorities of just 187 votes, Duffield inexplicably increased her majority last year to 1,836.

Having resigned as a party whip she may have saved Keir Starmer some tricky questions, but Duffield remains a Labour MP.  Of course it goes without saying that these developments have been largely ignored by broadcast media.  At the time of writing there has been no mention of it at all on the BBC or Sky.  Duffield, like all the other MPs accused of lockdown violations, is a Remainer.  Only Cummings the Brexiteer faces a daily onslaught from the mainstream media.

As of 11:26 on 31/05/20 this story has been totally blanked by the BBC and there is no mention of it on their website, not even in the Kent news section.