LABOUR STAFFER'S SWIPE AT THE NORTH 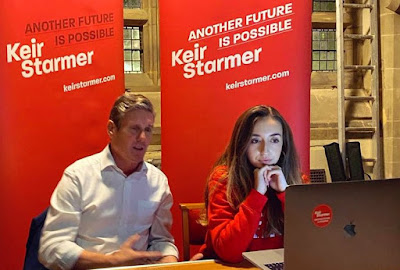 We are all acutely aware of how Labour has in recent years become the party of the metropolitan elite, primarily wealthy Londoners and the middle-classes.  The sneering attitude towards the rest of the country, Leave voters and the working class has become second nature to the London-based elite of the Labour front benches.  Corbyn, Abbott, Starmer, Thornberry, McDonnell, Butler, Osamor, Lammy, Gardiner - the list of London Labour frontbenchers in recent years is phenomenal.  London is now the Labour heartland, scene of the only seat it gained on December the 12th and now under the leadership of a second consecutive London MP.

One of those co-ordinating the campaign for Keir Starmer's election was senior Labour Parliamentary staffer Tara Jane O'Reilly (pictured above with Starmer).  She has previously worked for Sadiq Khan and also Owen Smith's failed leadership campaign of 2016.  Last night she tweeted the following take on the Dominic Cumming's affair...

At the time of writing the tweet is still there for the world to see - and yes London Labour, that does include the north, that huge electoral expanse that you despise, but cannot ever win power without.