CHEERLEADERS FOR THE MOB 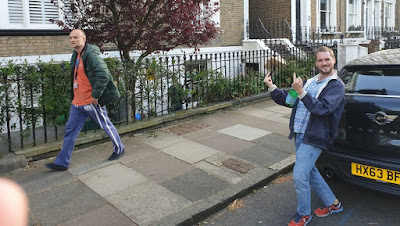 In the last few days the family home of Dominic Cummings has not only been targeted by a pack of press hyenas, but a number of protesters too.  One of the cheerleaders for the outrage is, of course, Piers Morgan.  Morgan has been unrelenting in his attacks on Cummings, just a few months on from his indignation at the treatment of the tragic TV presenter Caroline Flack.  In the aftermath of Flack's suicide, Morgan was an exponent of the hashtag #BeKind.  Yet in one recent tweet he suggests that Cummings was "literally prepared to kill his niece".  How times have changed?

In recent days Morgan has repeatedly clashed with Brexiteer Arron Banks on Twitter as to the motives of the industrial-scale assault on Cummings.  Banks claims that Remainers are largely behind the hate campaign out of vengeance for Cummings' involvement in Vote Leave and his role in helping implement Brexit.  While Morgan quite rightly points out that he himself supported the Leave mandate throughout 2019, despite backing Remain in 2016 - there is certainly evidence to back up Banks' claim.

On Sunday a huge screen was parked up outside Cummings' home and a video blasted out showing victims of coronavirus among other clips.  The stunt was carried out by the Remain group Led By Donkeys, famous for its anti-Brexit billboards.

Placard-waving protesters have also picketed the Cummings household and a video shared by The Independent shows Cummings being shouted out at as he walks down the street.  The newspaper claims that the people involved are neighbours of Cummings, but if you watch the video (below) you'll notice that the video is credited to a Twitter account called @LiveInUKLoveEU.  It's in the top left corner as the video begins.


Remember that this is all taking place outside a family home.  The child at the centre of Cummings' lockdown travels is inside that house and potentially witness to all this disruption.  Whatever your own views about Cummings' actions, is this a just response?  How many of these people were disgusted by what happened to Caroline Flack?  How would they feel if someone took things further and someone got hurt as a result of the mob mentality they are cheering now?

As one commentator pointed out, Cummings is so frequently met by a mob of reporters outside his home that this is the kind of attention that may have driven him to flee London in the first place.  The constant media circus outside his home (even prior to this scandal) meant that his location was easily known to left-wing extremists and Remain activists.  This morning the press even sunk as low as to show up outside the gates of the Cummings farm in Durham.

The Independent's lie that it was Cummings' own neighbours screaming at him over the weekend was lapped up by his local MP - hardcore Remainer Emily Thornberry.  The following rather distasteful tweet surely rivals her infamous white van effort of 2014. 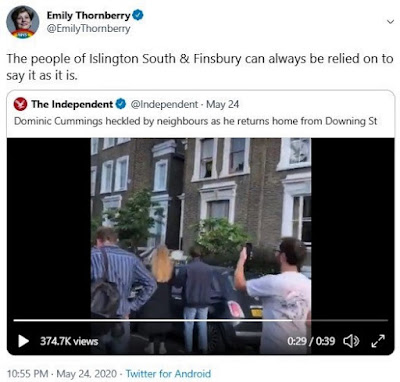 The targeting of Cummings' family home has also been applauded by the likes of Corbynistas such as Owen Jones and Ash Sarkar, again repeating the lie that the protesters were Cummings' own neighbours.  Sarkar in particular is well known for bemoaning the abuse she gets online, so you can imagine the self-indulgent outpourings if someone - just one person, let alone a mob - actually showed up on her doorstep.  When Owen Jones was assaulted outside a pub last year he embarked on a media tour to discuss the incident.  Many on the right questioned whether it actually happened at all (turns out it did), but no-one condoned it.  Looking at how the harassment and abuse of Dominic Cummings is being cheered on, one of the key differences between left and right is being laid bare once more.
at May 26, 2020