The Shadow Foreign Secretary admitted this morning that "a couple of Labour MPs got it wrong" during the lockdown.  Referring to the Stephen Kinnock incident, Lisa Nandy claimed that the MP had "acknowledged that he was wrong".  As far as we're aware he has never done any such thing, in fact when South Wales Police publicly challenged him on Twitter he defended his actions in the most conceited manner.  Nandy conveniently failed to mention the birthday aspect of Kinnock's visit.

Presumably the other MP Nandy was referring to was Tahir Ali.  That is, unless, there are more revelations to come.  Interesting to note that Labour have not signed the cross-party letter demanding that the Prime Minister sack Dominic Cummings (see below).  They're the only Remain party not to have done so.  Also interesting to note that Ian Blackford has signed, repeating his call for Cummings to go, particularly in light of his 600 mile journey to his home on Skye after lockdown commenced. 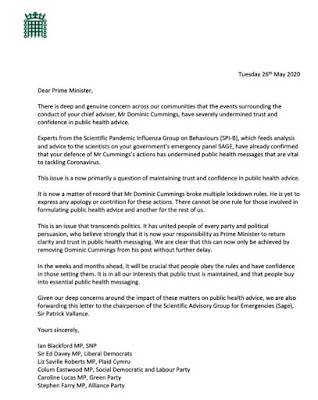