The Provisional IRA murdered a young policeman in a rocket attack in west Belfast.  Constable Samuel Vallely was one of five officers travelling in a police Land Rover when the rocket propelled grenade struck the roof of the vehicle.  It was a Thursday night and the men were passing through the republican New Barnsley area.  A petrol bomb was initially thrown at the Land Rover in order to light it up and provide the trigger man with a target.  A Soviet-made RPG-7 was then fired, lifting the roof off the vehicle and showering those inside with shrapnel.  The driver managed to drive on and take his injured comrades to Belfast's Royal Victoria Hospital.  Constable Vallely died from his injuries a short time later.  One of his colleagues was seriously injured, but survived. 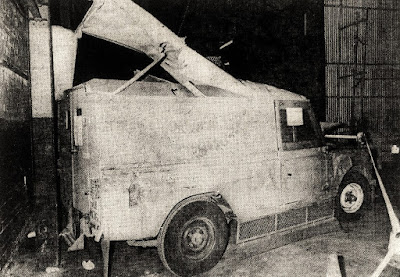 Constable Vallely was the first member of the RUC to die in such an attack, despite many previous attempts by the IRA.  The terrorists had reportedly fired 182 rockets at security forces between 1972 and 1981, 124 of which missed their target.

DUP leader Ian Paisley condemned the New Barnsley attack: "It is wholly unacceptable to the law-abiding community that our security forces are expected to face this battle with their hands tied behind their backs.  The firing of a plastic bullet causes an outcry from republican apologists, but the republicans' use of rockets will not provoke not even a squeak of protest from these quarters".


Constable Vallely was 23 and lived in Glengormley, north of Belfast.  He joined the force in 1977.  At the time of his death his wife was pregnant with their second child.  They were planning to emigrate to Canada following the birth, due later that year.

A 37-year-old from west Belfast was later charged with Constable Vallely's murder.
at May 14, 2020