Despite signing the previous Socialist Campaign Group letter, Jeremy Corbyn's name is absent from their latest declaration (see below, click to enlarge). 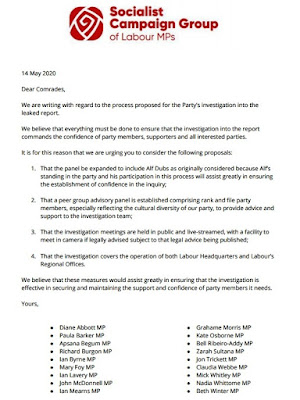 This latest list of demands has been sent to senior party officials including Keir Starmer.  Since the anti-Semitism report was leaked the group has written several letters, none of which were signed by Corbyn.  The leaking of the report and its inevitable fallout was carefully designed to destabilise the party after Corbyn was replaced.  These letters are a continuation of the plot to enact retribution on Labour moderates.  We know Corbyn is a sore loser, but it appears he's savvy enough not to get his own hands dirty.
at May 15, 2020