One of the most recent mini-crusades of Owen Jones was attacking the bourgeoisie over continuing to employ cleaners during the coronacrisis.  Here are a couple of his tweets from last week.

Little Owen's cause was even taken on board by Sally Howard of the Huffington Post...

The wee lad appeared on Jeremy Vine's Channel 5 show earlier this week to give further airtime to his cause, but was clearly not expecting a gotcha question from the host.  Vine asks Jones if he employs a cleaner himself and lo and behold it turns out that our working class hero does!  Watch below as his little smug face drops in horror as Vine delivers the damning question.

Note that Owen says he and his housemates have been paying their cleaner £50 a week during the pandemic so they're "not out of pocket".  However, this may well contradict his earlier assessment that professionals should be paying cleaners "wages as normal and letting them stay at home".  Owen says his cleaner is paid £20 per hour, so are we supposed to believe that his multiple occupancy takes just two and a half hours to clean per week?

Funnily enough Owen isn't the only socialist to have exposed himself to home help hypocrisy this week... 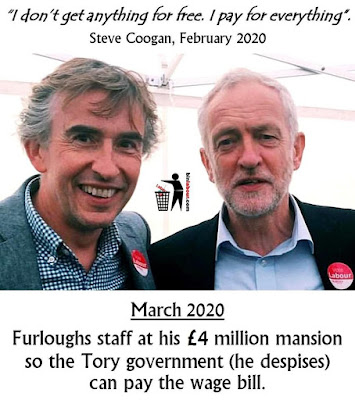