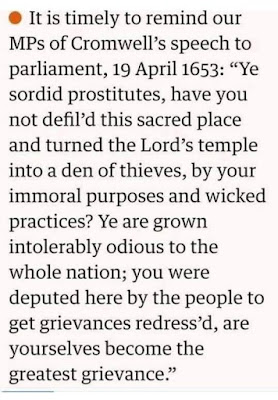 The above press cutting was sent in by one of our Facebook followers.  When viewed in full and in context the full speech (see below) is even more appropriate for the shameful Parliamentarians of today.  There are also a number of other comparisons between the Parliament of 1653 and the Parliament of today.  Cromwell's speech in which he denounced "thieves" and "sordid prostitutes" has since become known as the Dissolution of the Long Parliament.  The Long Parliament refers to a twenty year period in which Parliament sat before, during and after the English Civil War.  In actual fact there were plenty of interruptions to the session, including Cromwell's dissolution in 1653, from which the above quote is taken.  When Boris Johnson attempted to dissolve Parliament recently it was also to end a fairly long session, lasting since 2017.  The session has now officially ended ahead of the Queen's Speech tomorrow.

Cromwell's precise motives for dissolving Parliament are not known, while Boris Johnson's attempted prorogation will go down in similarly disputed circumstances.  There is also a similar irony in both cases, one which could put a smile on the faces of the Remainers of today (or the Royalists of 1653).  Cromwell had fought the English Civil War on the basis of Parliamentary sovereignty and yet here he was stood in that very chamber chastising its occupants before dissolving it altogether.  Brexiteers fought the 2016 referendum largely on the basis of Parliamentary sovereignty and yet the occupants of that chamber have been chastised on a daily basis by Brexiteers for the last year or so.

The Attorney General may well have had Cromwell in mind a couple of weeks ago when he chastised Parliament...

"It is high time for me to put an end to your sitting in this place, which you have dishonored by your contempt of all virtue, and defiled by your practice of every vice; ye are a factious crew, and enemies to all good government; ye are a pack of mercenary wretches, and would like Esau sell your country for a mess of pottage, and like Judas betray your God for a few pieces of money.

Is there a single virtue now remaining amongst you?  Is there one vice you do not possess?  Ye have no more religion than my horse; gold is your God; which of you have not barter’d your conscience for bribes?  Is there a man amongst you that has the least care for the good of the Commonwealth?

Ye sordid prostitutes have you not defil’d this sacred place, and turn’d the Lord’s temple into a den of thieves, by your immoral principles and wicked practices?  Ye are grown intolerably odious to the whole nation; you were deputed here by the people to get grievances redress’d, are yourselves gone!  So!  Take away that shining bauble there, and lock up the doors.