Boris Johnson enjoyed a rare victory on Tuesday as nineteen Labour rebels helped him to a majority of 30 on the Withdrawal Agreement Bill. 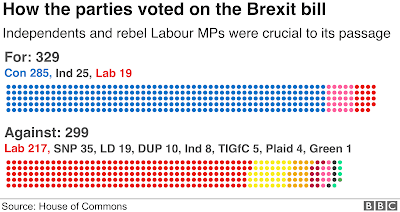 This was the vote where we finally uncovered those Labour MPs who had postured about supporting Brexit, but had yet to deliver.  They finally defied the whips and the hard left threats of McDonnell and Lansman.  The nineteen were as follows. 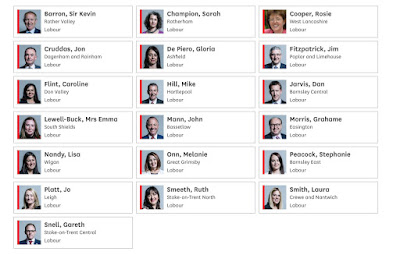 There were some surprises here, in particular the names of Mike Hill, Jo Platt and Lisa Nandy.  There were also some notable absences.  Despite flirting with the notion of a Brexit deal for months now, Stevie Kinnock backed out and voted against the bill.  Two-faced Lucy Powell also voted against the bill, while Justin Madders and Yvonne Fovargue abstained.  Hardcore Brexiteer Kate Hoey also abstained from the vote, but she never backed May's deal either and she is less likely to back Johnson's deal given her Protestant Northern Ireland background.  It's complicated.

Sadly, most of the 19 Labour rebels reverted back to form and voted down the timetable for the bill they had just voted for.  It won't spare them awful abuse from Remainers on social media though.  Only Barron, Fitzpatrick, Flint and Mann backed up their initial vote, with Kate Hoey providing the fifth Labour vote. 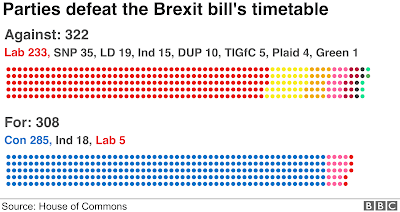 The PM has now put the bill on hold, for motives unknown, a decision that led Donald Tusk to announce his intention to extend Article 50 (collective groan).  Even die hard supporters of Boris Johnson are now beginning to ask serious questions about his apparent lack of countermeasures and the now strongly suspected absence of a masterplan that would have got us out next week.  A general election between now and the next Brexit deadline of January 31st is now inevitable.  The problem for Boris is that he is going into this election having failed to deliver Brexit and as such the Brexit Party will still be in play.  He simply has to swallow his pride (if he has any left) and cut a deal with Nigel Farage.  The Brexit Party can take out Labour MPs in the north of England, but it can only do so if the Tories stand aside.  The Brexit Party can then stand down elsewhere, in order to allow the Tories a free run in Labour marginals, particularly in the south of England.  It's a no brainer, but having seen the debacle of the last few weeks, we have to ask if there are any brains on either side of the Commons.
at October 23, 2019