Ashfield MP Gloria De Piero is no fan of Jeremy Corbyn, but she revealed just how deep that resentment goes with one click yesterday.  Over on Twitter we noticed that she'd liked a new Opinium poll that suggested Labour had slipped a further three points behind the Tories. 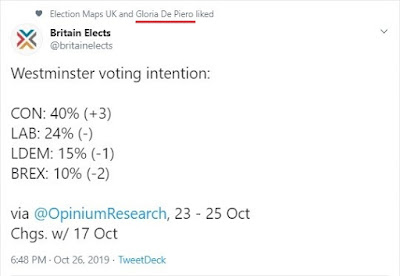 De Piero is standing down at the next election citing a "lack of tolerance" in the party, so she clearly has nothing to lose now.  She was also one of the 19 rebels who voted in favour of the withdrawal agreement last week.  Once again the Labour trolls appear incapable of realising that actions have consequences.

De Piero's constituency is definitely one to watch when the next election comes around.  Ashfield is the top marginal in Nottinghamshire and returned a whopping 70% Leave vote in 2016.  Labour should be dead certs to lose this seat at the next election, except they almost certainly won't.  The Brexit Party have identified this as one of their top targets, selecting prominent MEP Martin Daubney as their candidate.  They will do well, but will split the Tory vote so much that Labour will probably increase their majority, rather than lose the seat.  This is just another fine example of why it is vital that Boris comes to his senses and does a deal with the Brexit Party.