Nineteen Labour MPs have written to the EU imploring that they come to an agreement with our government as "the British people have become exasperated with Parliamentary deadlock".  Well, they're not wrong there!  The letter, addressed to Jean-Claude Juncker (and a copy also sent to Donald Tusk), can be seen below.  Click to enlarge. 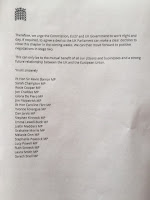 The letter has been denounced by Labour Remainers who are furious that Labour MPs - elected on a manifesto that stated that "Labour accepts the referendum result" - should have the barefaced cheek and audacity to uphold said result and party manifesto!  "What planet are you all on" blasts
@annikahjelmskog.  "Gobsmacked and very scared this is coming from Labour MPs elected on a Corbyn manifesto" moans @linda_whyman, apparently oblivious to the actual manifesto they were elected on.  "You don't speak for me or most Labour supporters" says @fliss59, obviously forgetting that an overwhelming number of Labour constituencies voted Leave.

The nineteen MPs who signed the above letter are as follows, including constituency and Leave/Remain vote.