The news that John Bercow has been conspiring with the President of the European Parliament in order to frustrate Brexit in the UK Parliament should have created more of a storm than it did.  While many newspapers carried the story, there was barely a mention in broadcast media - nothing on BBC, Sky or ITV.  No great surprise there really.  He'll be gone in three weeks anyway, regardless of whether he and his allies have succeeded (again) in halting Brexit.  Hopefully his last day in the chair will coincide with Brexit Day - third time lucky!

The following BTLP original was shared 4,126 times via the Facebook page. 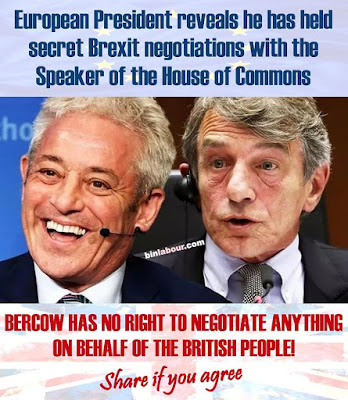