The First Minister of Wales has once again added his voice to the chorus of Brexit blockers.  Mark Drakeford has written to both Boris Johnson and Donald Tusk in joint letters co-signed by Scotland's First Minister.  The two letters are very different.  While the one to Boris states that the two devolved governments need more time to assess the Withdrawal Bill and lend assent, the one to Tusk is eminently more revealing.


We've also written to @eucopresident informing him of the requirement on UK Gov to secure the consent of the Welsh & Scottish legislatures, and expressing our support for an extension long enough to enable a referendum to be held- with an option to remain in the EU on the ballot. pic.twitter.com/ddfqYe95pc
— Mark Drakeford (@fmwales) October 21, 2019


So there we have it.  By his own admission, the extension is not about extra time for scrutiny, but extra time to force the British people to vote again.  This tactic is in line with national Labour policy and Keir Starmer has already suggested that Labour would only back the agreement if a second referendum is attached.  However, Drakeford has no mandate to make such demands.  Wales voted Leave in 2016 and in the European elections this year the Brexit Party finished top of the poll with more than twice the amount of votes received by Drakeford's Labour.  His persistent remoaning continues to alienate voters to such an extent that an opinion poll earlier this year put the Tories ahead of Labour in Wales.  More of the same please Mark. 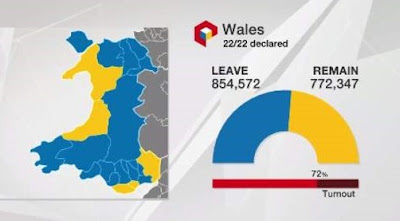