As you can see from the above headlines, it's very clear that suspended Labour crackpot Chris Williamson has lost his legal bid to be readmitted to the party.  However, the Derby North MP has bizarrely claimed victory and doubled down on some of the claims that got him suspended in the first place.  One can understand his desperation, he's just blown more than £60,000 worth of donations to fund the action.  The solace that he is taking from the action is that the judge ruled unlawful the party's decision to reinstate his suspension after he'd been briefly readmitted in June.  However, the somewhat convoluted ruling also stated that Labour had not acted 'unfairly' and ultimately the judge decided that the suspension would stand until the current investigation run its course.  Therefore the headlines are perfectly correct - Williamson remains suspended and as the clock ticks down to a general election he is highly unlikely to be readmitted and re-selected in time.  There is, of course, a great irony in that.

It was Williamson who embarked on a tour of the country last year in what he called a "Democracy Roadshow", calling for mandatory re-selection of all Labour candidates.  It was no great secret as to his game plan.  As an ultra Corbyn loyalist he was looking to please his master by encouraging a purge of moderate MPs.  Understandably he didn't endear himself to these moderates and there was uproar when the National Executive Committee (NEC) readmitted him in June.  Now it seems as if his Soviet-style interference has backfired spectacularly.

In a six minute video Williamson continues to pledge his loyalty to Corbyn while denouncing the 'witch hunt', a term regularly used by Labour's anti-Semites to describe various disciplinary actions against them.  Williamson doesn't refer to anti-Semitism directly, but it is clear what he is talking about and remember this is the kind of talk that got him suspended in the first place.  Watch below for his utterly deluded conspiracy-driven assessment. 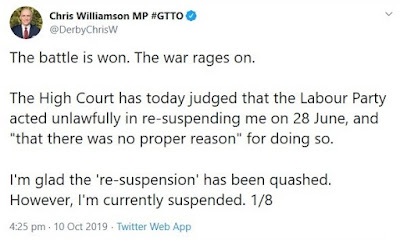