Frontbencher Laura Pidcock is often spoken of as a future Labour leader, but the people tipping her generally share her far left ideals.  Yesterday she tweeted her deep discomfort at the sight of Her Majesty's arrival for the big speech. 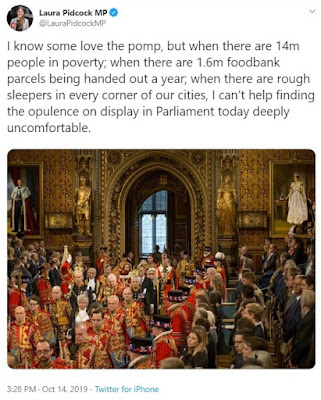 This is standard leftist propaganda.  It's not so much about caring for the poor as it is about expressing their intense dislike of anything that symbolises our nation, its history and culture.  Leftists are not proud of their country, they are only ashamed of it.  That's why you never see a Union flag at a Labour rally, in fact you're more likely to see a Soviet flag or that of Palestine.

Having only been elected in 2017 this would have been the second State Opening of Parliament witnessed by Pidcock.  At the relatively young age of 32 and representing a solid Labour seat she may have to get used to such "opulence" - that is unless this country suffers the huge misfortune of having a far left government.  It's not inconceivable in those circumstances that the monarchy would be deposed, after all that is the ultimate aim of the likes of Labour Marxists such as Corbyn, McDonnell, Abbott and Burgon.  Furthermore, in the event of such a catastrophic regime, there would be a lot more than 1.6m foodbank parcels and a lot more homeless too!
at October 15, 2019