All hope of leaving this Thursday was extinguished by our quisling Parliament last week.  We may as well stop referring to each deadline as 'Brexit Day', it would be more accurately described as 'Extension Day'.  The likes of Benn, Starmer, Lammy, Grieve, Letwin, Hammond and 300 others will be cock-a-hoop with their efforts, but we will exact our vengeance at the ballot box sooner or later. 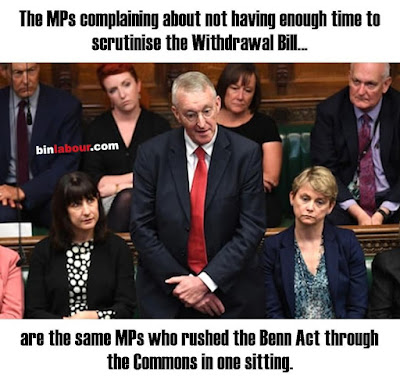 A couple of people noted that whereas the Withdrawal Bill consists of more than a hundred pages, the Benn Surrender Act was a fraction of that.  However, as many others have pointed out, the Withdrawal Bill is very similar to that drawn up by Theresa May's government and that has been in circulation for almost twelve months already.

The above meme is a BTLP2 original, shared 8,213 times via the backup page.  This is the first time since we've been doing this feature that the backup page has produced the 'most shared'.  The backup page is only in use when the main page is out of action and last week saw the worst act of political censorship by Facebook in the four and a half years of our existence.  You can help maintain our presence across social media by depositing a small donation here.  Thank you.
at October 27, 2019