“A skirmish almost broke out when a man tried to take his wife’s ballot and fill it out, but she opposed".
(Poplar & Limehouse selection meeting)

Labour selections and reselections are currently taking place across the country for the general election that Labour is desperately trying to block.  It sounds bizarre, but then this is Labour.  In the last two days police have been called to two separate selection meetings, for Nottingham East and Poplar & Limehouse.  The ballot paper for both seats was dominated by Muslim candidates and both winning candidates are dead certs to hold these safe Labour seats.


The Poplar selection took place in the banana republic of Tower Hamlets amid chaotic scenes.  Photo ID was required to get into the meeting, but this hurdle did not appear to 'disenfranchise' those attending (more Labour hypocrisy) as more than 500 mostly Muslim men crammed into the meeting hall.  Laughably, these all-female shortlists were supposed to be about equality, yet the turnout at this meeting reflected nothing of the sort.  The winning candidate congratulated "strong BAME women" for the campaign and then posed for a photo in which you can count the women present on one hand.  There was no mention of the LGBT candidate, funny that. 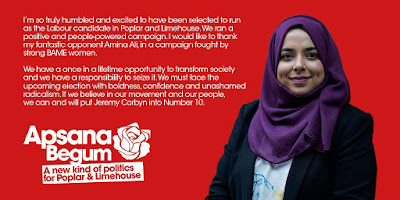 We know how her supporters want to "transform society" and "seize it".  The second paragraph is clearly aimed at her supporters (or dare we say, handlers).  When she speaks of "radicalism" she is not necessarily referring to socialism.  So much for feminism.  This is the future of our nation under a Labour direction.

Chris Leslie was one of the Labour MPs who left to form 'Change UK'.

Jim Fitzpatrick is not standing in the next election.
at October 29, 2019