LABOUR BOTTLE IT A THIRD TIME 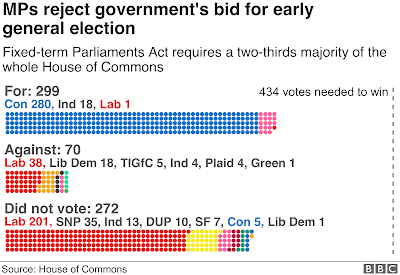 As promised, Labour MPs overwhelmingly abstained in the PM's third attempt to get a general election.  Boris says he'll keep trying, but it seems that Labour are intent on paralysing Parliament for months to come.  The electorate will not forget this quickly, nor will we forget who is to blame for blocking Brexit yet again.  The longer they block an election (and Brexit), the bigger their eventual defeat will be.  They can run, but they can't hide.

Ex-Tory Remainers who joined Labour in abstaining included the usual suspects of Grieve, Hammond and Letwin.  The only Labour MP who voted for an election was, rather predictably, Kate Hoey.  Ex-Labour MPs Ian Austin, Frank Field, Ivan Lewis and John Woodcock also supported the motion, an exceptional gesture considering they will almost certainly lose their seats in an election.  Many others are clearly desperate to hold on to their gravy train seats for as long as possible.  It was no great surprise to see Anna Soubry and her shrinking number of colleagues in Change UK (or whatever they're now called) opposing the motion.

38 Labour parasites ignored the party whips and voted against the motion.  They were all Remainers, with the sole exception of chief barnacle Skinner:

Interesting to note that this sickening list includes several MPs who are standing down at the next election, but who are clearly not in any hurry to depart the Westminster gravy train.  Also worthy of note is that all but one of Scottish Labour's MPs appears on the list, clearly fearing a wipeout at the hands of the SNP come the next election!
at October 28, 2019