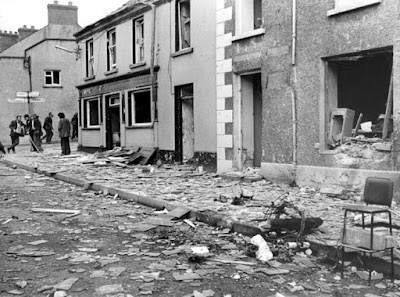 The Provisional IRA exploded three car bombs in the village of Claudy, Co Londonderry, killing nine civilians.  It was one of the worst atrocities during the Troubles and became known as Bloody Monday.  It was also one of the few terrorist acts for which the IRA continues to deny responsibility, although it is generally accepted that Provos were behind it.

The bombers parked the devices around the centre of the village shortly before 10am, when the Main Street was busy with shoppers, after which the perpetrators drove to Dungiven.  Along the way they stopped and tried to use a public telephone in the village of Feeny, but it was out of order.  When they reached Dungiven two men went into separate shops and tried to use their phones, but a bomb attack on the local telephone exchange had cut them off.  One of the shop assistants had to go to the local police station to warn the RUC, but by this time the first bomb had already exploded in Claudy.

The first device had been parked outside McElhinney's Bar on Main Street and detonated at around 10:15.  Three people were killed instantly, including an eight year old girl.  A 15-year-old boy was among three others who died from their injuries in the days and weeks that followed.  By the time the shop assistant walked into Dungiven RUC station the second device had been discovered and a policeman was clearing the area.  The second bomb was located in a mini van outside the post office on Main Street and members of the public were being ushered down Church Street, unwittingly in the direction of the third bomb, hidden inside another mini van parked outside the Beaufort Hotel.  At around 10:30 both bombs exploded almost simultaneously.

Due to the swift action of the police officer no-one was hurt by the post office explosion, although there was extensive damage to property.  However, the bomb outside the hotel on Church Street killed three people, including a 16-year-old boy who had been injured by the first explosion.

Claudy was a mixed village and the victims reflected this.  Five Catholics and four Protestants were killed.  The IRA vehemently denied involvement and later claimed to have carried out an internal inquiry which found that none of its units were responsible.  However, one name continued to crop up in relation to the attack, that of a Catholic priest - Father James Chesney.  Chesney was not only suspected of involvement, but he was thought to be the quartermaster of the 'Derry Brigade' of the IRA.  Chesney had provided an alibi for another man strongly suspected of involvement and when he was stopped at a checkpoint in September 1972 a sniffer dog found traces of explosives in his car.  However, despite everything the priest was never arrested or questioned and the following year he was conveniently transferred to another parish across the Irish border.

The controversy surrounding Chesney's alleged involvement and his apparent immunity led to a further investigation in 2002, by which time the priest had passed away.  This investigation revealed in 2010 that collusion between the British government and the Catholic Church compromised the initial RUC investigation, fearing that the arrest of a Catholic priest in relation to terrorist atrocities would lead to further sectarian clashes in the province.

No-one was ever charged over the Claudy bombings.  The IRA continues to deny involvement and in 2002 Martin McGuinness denied all knowledge of Father Chesney, despite both men holding senior positions in the same IRA 'brigade'.  When a service was held in 2017 to mark the 45th anniversary of the atrocity Sinn Fein stayed away.

30 civilians were injured in the Claudy bombings, the nine fatalities were as follows.

Elizabeth McElhinney, 59, Catholic.  A local nurse and shopkeeper, she was operating a petrol pump and was killed instantly.  She was survived by her husband.
Joseph McCluskey, 39, Catholic.  He had taken his four-year-old son into the village to buy a newspaper and was killed instantly.  He was survived by his seven children, including his son who survived the blast.
Kathryn Eakin, 8, Protestant.  She was cleaning the windows outside her family's grocery store and was killed instantly.  Her mother said at least one of the bombers would have seen her in the street when they parked the device.
Rose McLaughlin, 52, Catholic.  A shopkeeper, she was chatting to a customer when she was hit by shrapnel.  She died three days later from her injuries, survived by her husband and eight children.
Patrick Connolly, 15, Catholic.  He was in Rose McLaughlin's shop and was also struck by shrapnel.  He died eight days later.
Arthur Hone, 38, Catholic.  He was standing in Elizabeth McElhinney's shop and was struck by shrapnel.  He died from his injuries almost two weeks later, survived by his wife and two children.

Londonderry poet and songwriter James Simmons recalls the bombings in his piece 'The Ballad of Claudy'.

The Sperrins surround it, the Faughan flows by
At each end of Main Street the hills and the sky
The small town of Claudy at ease in the sun
Last July in the morning, a new day begun

How peaceful and pretty, if the moment could stop
McIlhenny is straightening things in his shop
His wife is outside serving petrol and then
A child takes a cloth to a big window-pane

And Mrs. McLaughlin is scrubbing her floor
Artie Hone's crossing the street to a door
Mrs. Brown, looking around for her cat
Goes off up an entry, what's strange about that

Not much, but before she comes back to the road
The strange car parked outside her house will explode
And all of the people I've mentioned outside
Will be waiting to die or already have died

An explosion too loud for your eardrums to bear
Young children squealing like pigs in the square
All faces chalk-white or streaked with bright red
And the glass, and the dust, and the terrible dead

For an old lady's legs are blown off, and the head
Of a man's hanging open, and still he's not dead
He is shrieking for mercy while his son stands and stares
And stares, and then suddenly - quick - disappears

And Christ, little Katherine Aiken is dead
Mrs. McLaughlin is pierced through the head
Meanwhile to Dungiven the killers have gone
And they're finding it hard to get through on the phone
at July 31, 2019