Jeremy Corbyn has been laying wreaths again.  While Americans celebrated their independence day on Saturday, our Jez was remembering another conflict.  He was joined by his wife Laura at the annual remembrance ceremony for the International Brigades who fought on the republican side in the Spanish Civil War.  The event took place at the brigades memorial in Jubilee Park, Lambeth (see Corbyn's tweet below). 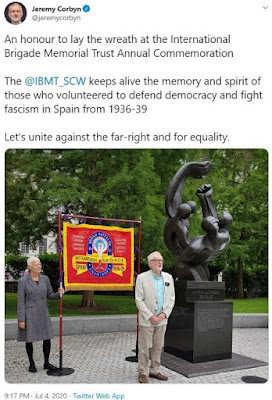 Corbyn addressed a small crowd and had the audacity to refer to the memorial as the one statue that was 'most appropriate' in the current climate.  Of course he would say that.  The International Brigades were communist units recruited by the Soviets by way of a proxy organisation called 'Comintern' aka Communist International.  In his speech Corbyn also drew comparisons between the left's fight against Franco and the rise of Black Lives Matter, as if we needed any more proof that BLM is a communist front.  Franco's four decades of totalitarian rule was also compared to the 'oppression of British colonialism'.

One Twitter user responded to Corbyn's post by brutally pointing out that like Corbyn, the International Brigades lost too.  Others pointed to his previous wreath-laying experience from 2014, when he laid a wreath for Palestinian terrorists and then famously tried to deny it four years later when he said he was present, but not involved...