News that Shamima Begum could return to the UK thanks to treacherous judiciary naturally provoked national outrage.  Feelings are particularly high because we all know that once she is back she will be back for good.  Furthermore, there is little confidence that she will face justice for her crimes.  While her membership of Daesh is not in any doubt, this wouldn't put her away for long.  As for other terrorist offences it would be almost impossible to prove guilt in a UK court.  The crimes occurred thousands of miles away, there is no physical evidence and many of the witnesses would either be dead or languishing in refugee camps in the desert.  Put simply, we are going to have to get used to the idea of her living out the rest of her days in this country at great expense to the taxpayer.  Thanks again, judges.

The following meme is still viral, but at the time of writing it has been 50,764 times via Facebook page. 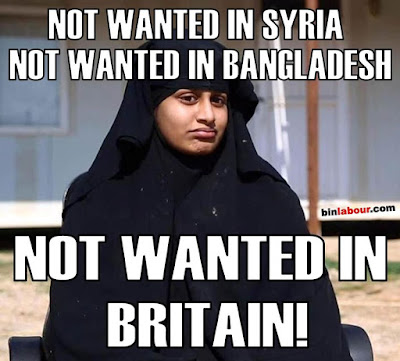