Brexiteer Darren Grimes is taking legal action against the BBC over a libellous news broadcast.  On Thursday Radio 4 carried an item relating to an interview Grimes had conducted on his recently launched Reasoned website with the historian David Starkey.  Starkey had made racist remarks during the interview, but it was Radio 4's description of Grimes's website that sparked the legal action.

Radio 4 claimed on its Six O'Clock News broadcast that Grimes describes his website as a "safe space for racist and homophobic views".  Of course Darren had done no such thing and within 24 hours he'd instructed his solicitors to take action. 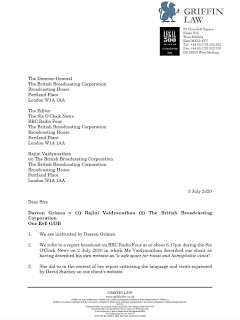 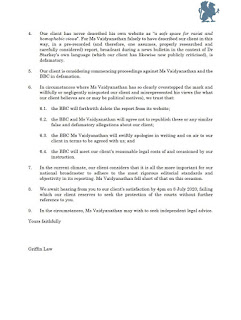 Grimes has received widespread support for defending himself against the smear, including from ex-Welsh Tory leader Andrew RT Davies, actor Laurence Fox and broadcaster Julia Hartley-Brewer.  Meanwhile, the BBC responded on Friday by adding a correction to its website, hidden away in the corrections and clarifications page which barely anyone is aware of, let alone able to find without a link.  Bizarrely, in their correction the Beeb uses LGBT website the Pink News as a reliable source. 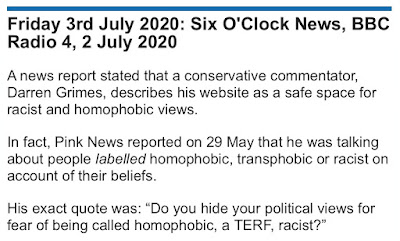 Astonishing to find that our national taxpayer-funded broadcaster uses such dubious sources for  news stories, but even though the source in this case was correct they still somehow misreported it.  One could be forgiven for thinking that this was indeed nothing short of a deliberate smear.

Darren Grimes has only recently emerged vindicated after several years defending himself against a witch hunt by the Electoral Commission and the Metropolitan Police over his involvement in Vote Leave.  Now it appears he's off to court yet again.
at July 04, 2020