The caretaker leader of the Lib Dems has reported Nigel Farage to the police after Farage tweeted a photo of himself down the boozer on Saturday.  Farage's local pub re-opened at midday and at 12:23 - nearing the end of his first pint - the Brexit Party leader tweeted that he was the first customer through the door.  However, it didn't take his critics long to point out that Farage was in the US just two weeks ago and may have been breaking the 14 day quarantine rules by visiting the pub.  Three hours later Ed Davey tweeted to say he had written to Kent Police to ask for an investigation into the matter.  In the meantime Nigel had defiantly tweeted again to inform his detractors that he'd been back in the UK two weeks and had tested negative for the virus. 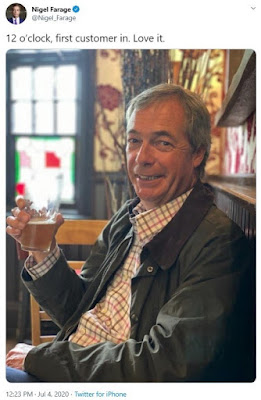 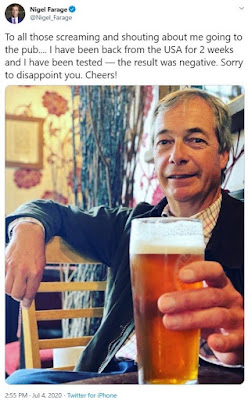 The ensuing frenzy set Twitter alight and the name 'Farage' was trending all afternoon.  While it does appear that he's guilty of breaking the rules, even if only by a matter of hours, many lashed out at Davey over what was seen as a petulant move.

Of course we all know why he did it.  The Brexit-hating Lib Dems are so bitter and twisted they will take any opportunity to attack those who engineered Britain's EU departure.  They were vociferous in their calls for the head of Dominic Cummings, but strangely silent over the lockdown adventures of Tory minister Robert Jenrick.  Whereas Cummings was a main player in Vote Leave, Jenrick backed Remain in the referendum.

Davey was also scathing about another prominent Vote Leave figure less than two weeks ago - the Foreign Secretary Dominic Raab.  In a BBC interview Davey slammed Raab after he said he wouldn't 'take the knee' for Black Lives Matter.  Davey demanded that Raab issue a 'fulsome apology' and take the knee.  He and his Remain chums would love that.  Ed Davey is so bitter, not only about losing the referendum itself, but watching his party totally crushed at the Brexit decider - the 2019 general election.

In going after Nigel Farage, Ed has also opened himself up to accusations of hypocrisy.  In an article on his website posted on June 6 he threw his full support behind BLM and suggested that 'actions speak louder than words'.  So why then is it OK for thousands of people to flood the streets during lockdown, but one man sitting in a pub on his own must be prosecuted?  Do tell Sir.
at July 05, 2020