'NO REGRETS' OVER TAKING KNEE 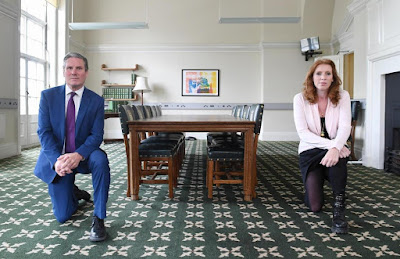 Keir Starmer chatted to LBC's Nick Ferrari and fielded several calls from the public on Monday morning.  After exchanging pleasantries over his freshly cut and super glued hair, Sir Keir was confronted with a cheekily pre-recorded question from none other than Boris Johnson.  The PM was in the same studio last week and left Starmer a question about the re-opening of schools.  Starmer responded by laying into Johnson and once again referred to a 'private letter' he'd wrote to the PM that he now chose to publicise in order to attack him.  Sir Wooden Top punches below the belt time and time again, but given his legal background this should come as no surprise.

His first question from the 'public' just happened to be from a Labour member angry at Starmer's Black Lives Matter u-turn.  Sharon from Waltham Forest didn't hold back and accused the Labour leader of 'dismissive language and attitude feeding institutional racism'.  She asked him if he would consider undertaking 'unconscious bias training' in view of his apparent u-turn.  Starmer's response was shrewd, but in reiterating his distancing act between the movement and the organisation he is storing up problems for the future.  But there was worse to come...

When Ferrari asked him about his knee-taking Starmer replied: "I don't regret it at all, it was an expression of solidarity, of recognition, of the importance of the Black Lives Matter movement and what they stand for across the world".  What they stand for Sir Keir is division, hatred, abolishing the police, destroying and rewriting history, overthrowing capitalism and replacing it with communism.  You stand with that?  Duly noted.

Starmer added that he was 'pleased and proud' that he'd taken the knee.  This may resonate with some hard left voters, but it will go down like a lead balloon with working class people who have watched the hard left rampage through their city centres during lockdown, attacking the most sacred of British monuments and calling for the destruction of everything that made this country great.  Smart move Sir Squeaky, not.

Watch the full exchange below (29 minutes).