It's going to be a long, hard summer recess for Sir Keir Starmer.  Following yesterday's £370,000 settlement with the anti-Semitism whistleblowers he told the Commons at PMQs that the party was 'under new management'.  Indeed, but the old management have no intentions of going quietly.

For the first time since he returned to the backbenches, Corbyn himself lashed out publicly against the new regime.  His followers rallied to him with cries of solidarity and supportive hashtags have been trending on Twitter for the past 24 hours.  Corbyn's statement on his Facebook page (see below) demonised the whistleblowers using the infamous leaked Labour report, suggesting they themselves were guilty of racism. 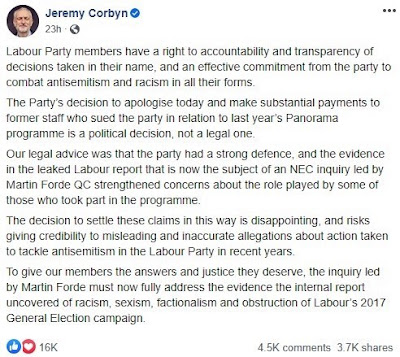 The leaked report was always intended to defend Corbyn's leadership and attack his enemies.  The fact that it was leaked little more than a week after Starmer took over the leadership is no coincidence.  The moment Starmer's victory was sealed he was designated enemy number one in the mind of Corbyn's followers.  The Great Leader may have fallen, but his leadership and his legacy are still of paramount importance to them.  They are genuinely more concerned with destroying a moderate Labour Party than deposing a Tory government. 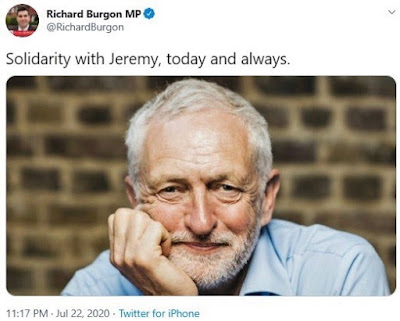 The BBC reporter behind the Panorama documentary is now reportedly planning to sue Corbyn, the mere suggestion of which has swung Corbynistas into a fundraising campaign for his legal costs.  A GoFundMe site has been set up and has raised more than £30,000 in just a few hours.  Bear in mind that Corbyn is a multi-millionaire and is not exactly destitute, a fact that his comrades don't like to address.

The fallout from this may well pale into insignificance as there is a bigger flashpoint on the horizon.  The Equality and Human Rights Commission report on Labour anti-Semitism has yet to be officially released.  The leaked Labour report will again be brought out in defence of Corbyn and to demonise his enemies.  Considering that these enemies all possess Labour membership cards makes this yet another internal conflict, something that seems to follow Corbyn around like a bad smell.  Division dogged his leadership and now he is keen to make trouble for his successor.

At one point yesterday there was media speculation that Starmer would remove the whip from Corbyn.  It may yet come to that.
at July 23, 2020