A Labour candidate has given the BBC's John Ware the finger in a petulant selfie on Twitter.  Ware is suing Jeremy Corbyn over the Panorama documentary on Labour whistleblowers. 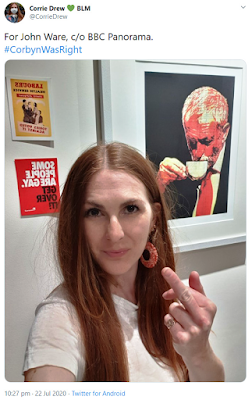 Corbyn fanatic Corrie Drew stood for the party in Bournemouth East in December, finishing second.  She was so desperate to get elected that she set up crowdfunding pages to pay her bills and living costs so she could devote all her time to campaigning.  More recently she has been campaigning to have the statue of Baden-Powell removed from Poole seafront.  She has enthusiastically embraced Black Lives Matter and tweeted last month that white people should either support BLM or shut up.

Drew's finger gesture was retweeted and condemned by a number of Corbyn critics including former Labour MP Ian Austin.  The resulting attention led to Drew locking down her Twitter account.  It appears that she can give it, but she cannae take it.