The BBC has deleted a video clip from one of its Twitter accounts after a backlash.  The disgusting clip features two young women making derogatory remarks about white women using the racial slur 'Karen'.  Karen is the female equivalent of 'gammon' and refers to middle-aged white women who are characterised as racist.  The irony of racially profiling a group and then accusing them of racism is lost on both these girls and also, clearly, the BBC.

In the clip (see below) the presenter Sadia Azmat asks her two correspondents: "How can white women not be Karens?"  YouTuber Amelia Dimoldenberg begins the discussion by declaring that they need to 'educate' themselves and 'read some books'.  History lecturer Dr Charlotte Riley then joins in and says white women need to stop being 'defensive about their whiteness'.  Finally the pair decide that white women 'should get out of the way' and 'leave'.  The clip then cuts off as they both snigger.

If they truly believe there is such a thing as 'white privilege' then one might argue that these two middle-class white girls are using their own privilege as a platform.  The sneering of the left towards people who don't share their views has become more tangible in recent months, harking back to the post-referendum belittling of Leave voters as 'thick' and 'racist'.  The arrogance displayed by the BBC in broadcasting such views caused dismay as the clip went viral.

Tory MP Ben Bradley was so incensed he announced that he was cancelling his TV licence. 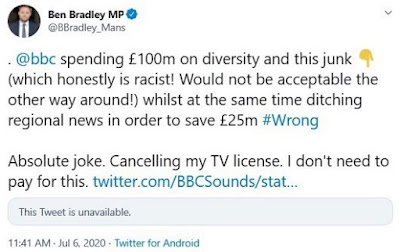 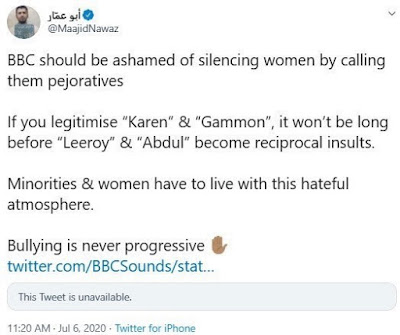 The tweet itself was deleted the same day, but at the time of writing the clip remains intact as part of the podcast in which it was originally broadcast.  The podcast is entitled 'No Country For Young Women' and has in recent weeks featured discussion surrounding the Black Lives Matter movement and identity politics.

Dr Riley calls herself a 'feminist historian of twentieth century Britain' and teaches at Southampton University.  She is currently writing a book entitled Imperial Island, which 'tells the story of how ordinary people’s lives have been shaped by the messy, complex, brutal and surprising history of British imperialism'.  You just know that is going to be one long essay on how all that is wrong in the world can be blamed on our ancestors.  In addition to her BBC contribution, Riley also co-produces podcasts of her own, alongside fellow feminist and socialist lecturer Dr Emma Lundin.

It's not clear if Riley is a Labour member, but she cites the history of the Labour Party as one of her interests.  She is followed on Twitter by a number of Labour MPs including Apsana Begum, Harriet Harman, Dave Lammy, Clive Lewis, Siobhain McDonough, Alison McGovern, Charlotte Nichols and Rachel Reeves.
at July 08, 2020