On Wednesday award-winning British actress Jodie Comer became the latest target of the far left Twitter hate mob.  Her 'crime' in their eyes?  She is rumoured to be dating an American who supports the Republican Party of President Trump.  Apparently that's all it takes now for a celeb to fall foul of the mob - a rumour of association with someone who doesn't toe the commie line.

Comer had already quit social media prior to the onslaught, so she will have avoided the worst of it.  Her name still trended on Twitter as the hatemongers vented their fury amongst themselves.  Wonder how many of them tweeted the hashtag #BeKind after Caroline Flack committed suicide?

Meanwhile, someone who's not for backing down from the trolls is former Labour MP Ian Austin.  His crusade against Jeremy Corbyn's far left Labour still clearly rankles Jezza's loyalists.  On Wednesday he tweeted the following effort with the caption: "Kinder, gentler politics". 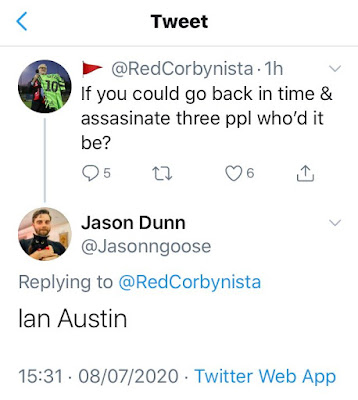 Austin is used to it by now and has a thick skin.  That's more than can be said for @RedCorbynista who went to ground after Austin tweeted the above screenshot to his 35,000 followers.  One might argue that his part in the equation was eminently more innocent than Jason Dunn whose friendly cat-hugging profile picture belies something altogether more sinister... 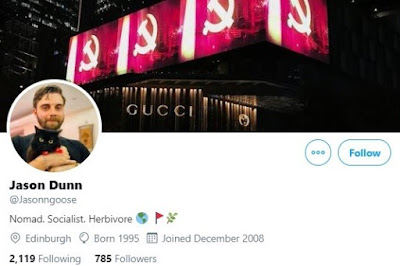 Jason appears to embody Lenin's famous quote: "The goal of socialism is communism".  Minus the Gucci logo, obviously.
at July 09, 2020